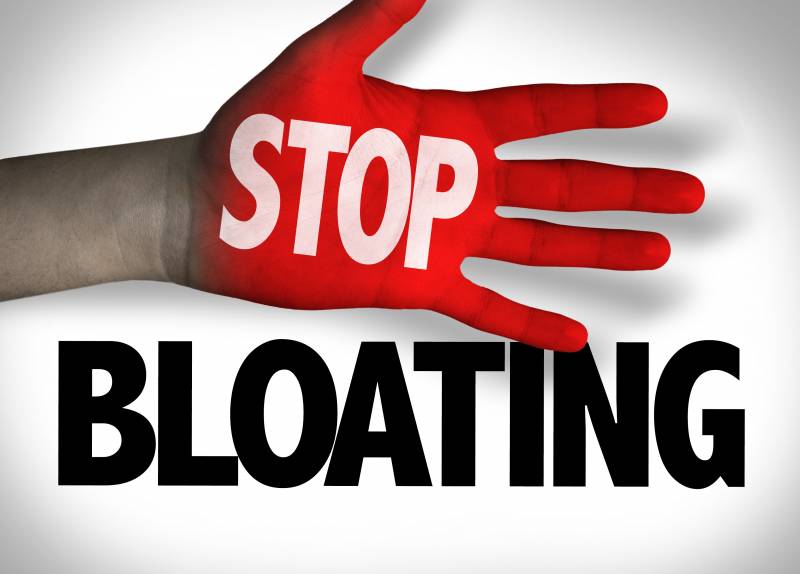 Some people define bloating as a feeling – like their stomach is distended or swollen all the time. Sometimes the symptoms can be associated also with constipation. For others, bloating is the appearance of their tummy looking “pregnant” later in the day, or the belly protrusion that you feel still exists in spite of weight loss. To complicate matters, not all of these perceptions correspond to a clinical diagnosis of bloating, which is more narrowly defined as the presence of gas trapped in the abdomen or actual abdominal distention as observed by a doctor upon physical examination. And even in the case of actual distention, not all bloating is due to dietary factors as several medical conditions can bring about these same symptoms. As a result, sometimes a work up by your doctor is required to truly understand the nature of your bloated belly and to narrow down what dietary factors, if any, may be involved.

Here are some common possibilities:

In regard to this type of bloating, the common refrain is that people feel fine after breakfast, but the bloating starts up soon after. Within an hour of lunch, the stomach distends to the point where pants need to be unbuttoned, and it remains this way for the rest of the day. It is often only relieved upon waking up the next morning. Sometimes, if you are following a low carb diet you may notice that your symptoms are better when you don’t eat carbs. Sometimes it can be from eating certain types of sugar (lactose or fructose), sugar alcohols, dietary fibers, or so-called resistant starches (like those found in beans).

Whether someone complains of a rock-solid belly or abdominal pain that builds as the day progresses, it’s helpful to notice if you feel better after you have moved your bowels. If so, you may just be experiencing some constipation. Normal intestinal gas gets trapped behind slow-moving bowels and builds up as a result. The trick to eliminating this as a cause of belly bloat is a very gradual increase in dietary fiber. Too much additional fiber too quickly can actually make the bloating worse, so the key is to ramp up slowly. Focus on insoluble fiber from bran, seeds, and fruit and vegetable skins rather than soluble fiber, like inulin, from processed, high-fiber cereals and snack foods. The former is much more likely to speed up intestinal transit while limiting the amount of gas produced as a byproduct.

This is becoming more and more common as our food supply becomes more and more refined – or you might be starting to develop an allergy to wheat. In this case sometimes bread, pasta, flour, or beer is likely to be a trigger. Often, a Celiac-related bloated belly can take some time to deflate—up to a day or two after ingesting food that triggered it. Celiac-related bloating may also be accompanied by foul-smelling flatulence and diarrhea, though some suffer from constipation instead. A simple blood test will tell your doctor whether further diagnostic testing is needed.

This type of bloating is especially bad when someone eats a big, raw salad on an empty stomach; there’s just something about dumping all that roughage on an acid-prone tummy that seems to churn up bloating and cramping. In regard to non-acid dyspepsia (indigestion), smaller, lower-fat meals are generally better tolerated, and a glass of seltzer may work wonders. In fact, despite the common belief that avoiding carbonated beverages will help prevent bloating, the opposite is generally true. Fizzy drinks can induce belching, which helps relieve the pressure from gas buildup in the stomach. Carbonated water has been proven to be more effective than tap water in easing symptoms of indigestion.

If an otherwise thin person complains of bloating but denies constipation, discomfort, or excess flatulence, he or she may be carrying extra tummy fat. There are several reasons this can happen. Cigarette smoking can influence where fat is deposited, and it tends to favor the tummy. Chronic alcohol intake also favors fat deposits in the abdominal area—more so in men, but to a lesser degree in women, too. This has to do with an increase in the enzyme system designed to metabolize substantial alcohol intake; these enzymes are concentrated in the abdominal area and convert alcohol into storage-ready fats known as triglycerides. While beer has a reputation of being more likely to produce this type of effect—hence the term, “beer gut”—excess intake of any alcohol is equally likely to induce this phenomenon. In some cases, natural body type can be a factor. Among women, so-called “apple shapes” are much more likely than “pear shapes” to retain fat in the midsection. This is, unfortunately, Mother Nature’s mysterious plan for you. The best way to address this is generally overall weight loss from whatever diet and/or fitness plan that works best for you. Eventually, some fat will come off the midsection—even among the apples.

If belly bloat plagues you, consider whether any of the descriptions above fit your brand of bloating. Then, keep a written journal for one to two weeks that details foods eaten, symptoms experienced, and bowel movements passed (including times of day for everything noted). Include it all, no matter how inconsequential it may seem! Note your vitamins, alcohol and water intake, salad dressings, and even the M&M you snagged while passing a co-worker’s desk. This record could be an invaluable tool to help your doctor sort out your symptoms.

Inflammatory bowel disease is an umbrella term that includes the conditions Crohn’s disease and ulcerative colitis, and both are caused by the bowel becoming inflamed, possibly due to the immune system mistakenly attacking it. As part of this condition the joints can also become inflamed, triggering pain. This inflammation can usually be seen during a colonoscopy.

In addition, there is another option to consider- a form of inflammatory bowel disease called microscopic colitis. This triggers watery diarrhea without bleeding, and typically affects middle-aged adults and older. The cause is unknown, and it can only be diagnosed through a biopsy (where a small fragment of tissue is pinched off from the lining of the intestines). This is because the inflammation is not visible with a colonoscopy, and can only be detected by analyzing a tissue sample in a laboratory.

If none of these scenarios apply, there can be other, more serious conditions that can be the cause of your belly bloat. If you have significant amount of pain associated with your bloating or if your abdomen began to swell quickly over several days to weeks, it may be worth a trip to your doctor to discuss things more in depth.

Of course, it could just be a matter of diet and exercise – these simple things still matter and in the long run you will feel better by taking better care of YOU.

Until next time, here’s to the best of your health!!

Follow Your Nose, Essential Oils that Can Motivate Your Mood and Help Your Workout

Move It So You Can Lose It: Why We Shouldn’t Sit For More Than 3 Hours

Ab and Hamstring Workout on the Total Gym