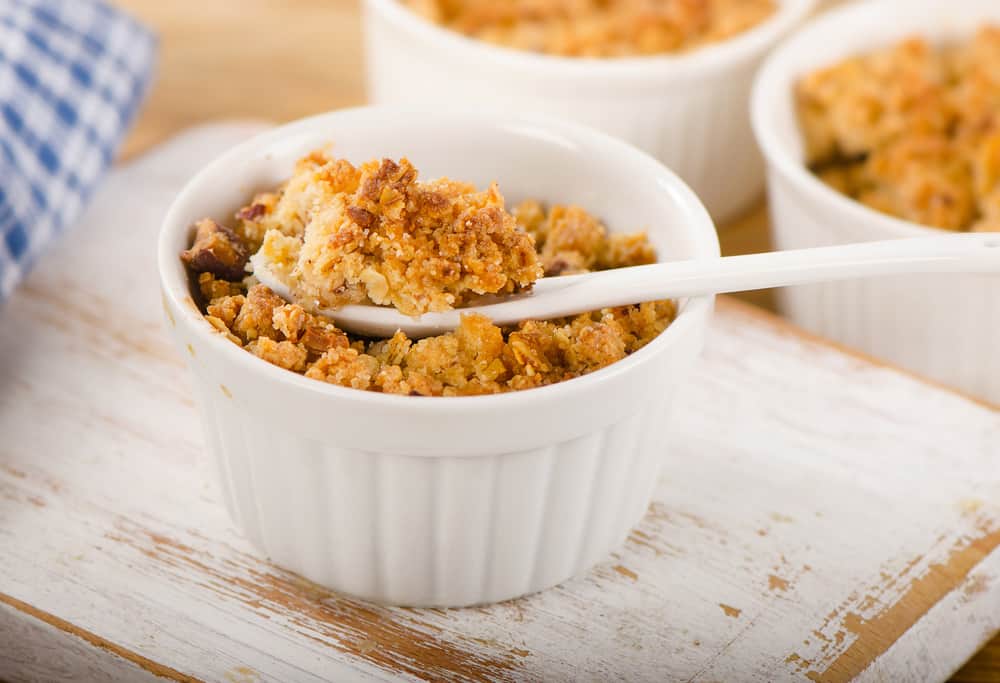 Who else loves having dessert? I know I do! Well, you can make a delicious dessert that is similar to your favorite decadent desserts. I enjoy a cheat meal of an amazing dessert every once in a while, but still make sure to include a healthier choice when making my selection. That way, it’s not a total lapse in judgment and doesn’t leave me feeling guilty after enjoying it. I absolutely love an apple-pear crisp and this recipe below lets you indulge without any guilt.

Preheat oven to 350 degrees. For the topping, combine quinoa flakes, coconut sugar, spices and pecans in a large bowl. Pour melted coconut oil over top and maple syrup. Mix together.

For the filling, in a large bowl combine the apples, pears, apple juice, cinnamon and coconut sugar. Place the filling ingredients into a baking dish and then sprinkle the topping. Bake for 25-30 minutes. Let cool for 10 minutes and serve warm with some coconut ice cream!

I love knowing exactly what ingredients are in my desserts. This allows myself to be in control of what exactly is in my meals. I can pick all of my ingredients in my low-calorie, low-carb dessert, or cheat meal. Planning out and including a cheat meal every once in a while allows you to have a healthy balance. I usually allow a low calorie dessert once a week but I always make sure it’s homemade and from ingredients that I know are a healthier choice. The above apple-pear crisp is a perfect recipe for a summer cookout as well!

Brittany Jaroudi is a wellness lifestyle blogger from Pittsburgh PA. Currently she is working towards a plant based nutrition certification through Cornell University. She loves helping people achieve health through a whole foods plant based lifestyle. You can find her blog and social media accounts under the name The Jaroudis.http://www.thejaroudis.com

The Best In-Season Fruits & Vegetables to Eat This Fall

How to Start a Fitness Journal for the New Year