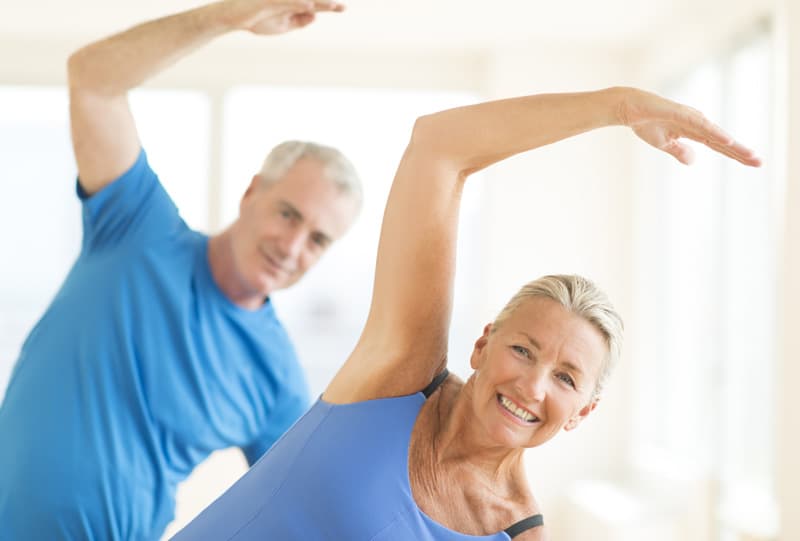 The benefits of regular daily exercise have been proven time and again. It is well known that exercise helps with weight control, mood enhancement, endurance, stress management and even sleep! We are now are learning more and more about how exercise can even help your memory!

In 2013, an article in The Annals of Internal Medicine reported that good physical fitness is directly correlated with a lower risk of developing dementia and Alzheimer’s disease. In fact, the researchers reported that the risk was 40 percent less by the age of 65 than those who were not in shape. They studied 20,000 adults in the age range of 40-50 who were patients at the Cooper Institute in Dallas over the course of ten years. The bottom line was that physical activity correlates with improvements in fitness and less dementia or memory loss with age.

This is exciting news, especially given the fact that illnesses such as Alzheimer’s are becoming increasingly more common as we age. In fact, estimates vary, but experts suggest that more than 5 million Americans may have some form of dementia. According to the National Institute on Aging, Alzheimer’s disease is an irreversible, progressive brain disorder that slowly destroys your ability to process and remember new information and impairs your ability to think in complex ways. Alzheimer’s is currently ranked the 6th leading cause of death in the United States but is becoming a more common cause of death as our population ages.

The term dementia refers to the loss of brain functions that include thinking, remembering and reasoning. It can range in severity and there are a variety of causes depending on the type of brain changes that occur as well as where in the brain the loss of function happens.  According to the National Institute on Aging, Alzheimer’s is the most common cause of dementia but many suffer from a combination of both Alzheimer’s and vascular dementia whereby the blood flow to the brain is impaired and causes degeneration in critical areas of the brain. The area in the brain called the hippocampus is essential in forming memories and is one of the first areas of the brain that are affected by the cell damage that occurs due to dementing illnesses.

There is a significant genetic component to Alzheimer’s disease, but the good news is that lifestyle factors are extremely important as well. More and more data supports the fact that there is a very strong relationship between cognitive decline and vascular conditions such as heart attacks and strokes. It makes sense that if we do our best to prevent vascular disease, treat blood pressure aggressively and prevent the onset of diabetes, it can help minimize potential cognitive decline by helping your brain function as normally as possible in a nutrient-rich environment as you age.

The symptoms of dementia and Alzheimer’s can vary but the most common symptom is that in the early stages, you can have some issues with word finding, loss of sense of smell, impaired reasoning or judgment. These symptoms can progress in varying ways but the end result is a loss of independence due to the inability to complete normal everyday tasks.

The treatments for these diseases are rapidly evolving. Currently no medicine can halt the loss of brain function and the damage that then results, but there are medicines that are currently available to slow the progression of loss of brain function. We do know that the benefits of exercise have a significant impact on your blood vessels and vascular health so anything that improves blood flow will improve brain function, since the brain has a high demand for oxygen-rich blood flow. A study in the 2012 issue of the Archives of Neurology studied 201 adults at Washington University in St Louis and found that even in spite of a genetic tendency towards the development of Alzheimer’s, exercise seemed to lower the risk to the same levels as those without a genetic tendency. The exciting part of this ongoing research is that it seems that exercise can benefit brain function and preservation in spite of genetics. The type of exercise that seems to make the most impact is the type that gets your blood flowing by increasing your heart rate – this infuses your brain with rapidly flowing oxygen-rich blood.

Studies have shown that the following types of exercise are best for those trying to prevent or suffering with a dementing illness.

Flexibility exercise: Designed to maintain range of motion and stiffness and should be done daily

Cardiovascular exercise: Light to moderate walking or stationary bike riding for 30 or more minutes a day for four or more days of the week. If you aren’t steady enough to walk or use a bike, using stationary equipment such as the Total Gym is a great way to get your daily dose of cardiovascular fitness

Strength training: Using a stationary piece of equipment, resistance bands, free weight or a combination of all should be done at least 3 days per week as maintaining muscle mass helps keep you strong and functional

The bottom line is that anything that gets your blood moving and is done regularly can make a world of difference in terms of maintaining brain function and keeping your memory sharp.  The data is compelling and you have nothing to lose (except unwanted weight) and everything to gain. You only have one brain, so keep it happy by keeping it well supplied with oxygen-rich blood. Your brain and your family and friends and your memory of them will thank you

Until next time, here’s to the best of your health!