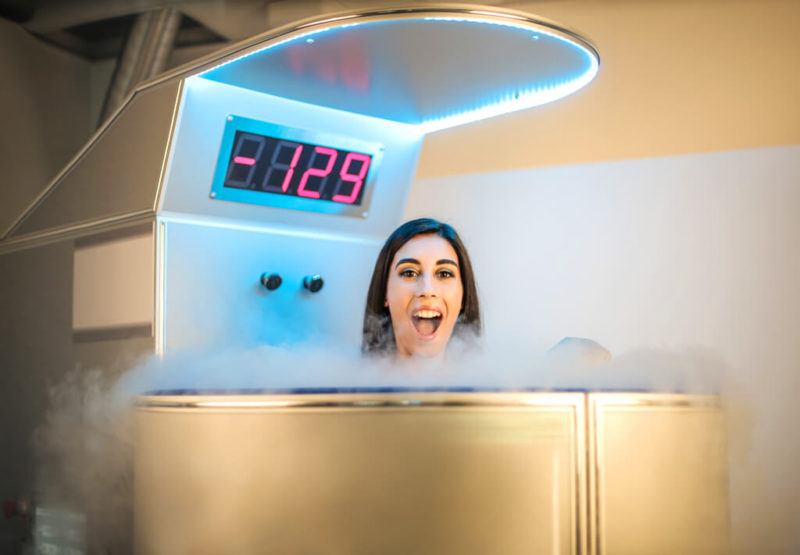 The term cryotherapy is used to refer to any type of therapy that involves the use of cold temperature for treatment. It has been used for many years in Japan and more recently in the Western countries. Thus, cryotherapy can be used to treat a variety of ailments.

Topically liquid nitrogen, which is in a liquid state of minus 70 degrees Fahrenheit can be used to treat skin lesions by using sub zero temperature to deaden skin lesions and thus causing the deadened skin to later flake off.

Locally, ice can be used to treat soft tissue injuries by the local application of frozen items. The theory behind the use of ice and similar products has to do with the effect on the blood flow that is brought into the injured tissues. Normally, after we sustain an injury to our bodies, blood enters into the injured area and carries with it white blood cells, which not only help to fight infection but also help to bring inflammatory substances into the area in order to promote healing over time. In the first stages of healing however, the inflammatory response can cause more swelling in in migration of more blood and fluid to the injured area. The idea behind the use of ice after an injury has to do with the effect on blood vessel and the constriction that occurs once the ice is applied to the area. The effect of vasoconstriction limits the blood flow to the injured area and thus minimizes the influx on inflammatory substances, as well as white blood cells.

Cold temperatures have also been theorized to promote weight loss due to the effect that cold exposure has on your body when you shiver. When your body is exposed to cold temperatures, it responds by causing you to shiver which generates body heat by the movement of small muscles. The theory is that this increase in muscle movement leads your body to burn up more calories. In fact, in more recent times, spas have taken to using cryotherapy to not only promote weight loss but also to improve skin tone and boost moods. The theory behind the enhancement of moods has to do with the idea that cold exposure causes a release of your bodies adrenaline and endorphins and causes your heart to pound stronger and faster which can be invigorating, to say the least. The idea is that your mood can benefit from the release of these hormones after exposure to harsh cold.

Because of this capacity of your body to respond to cold exposure in the ways that it does, there is now a newer therapy that is called Whole Body Cryotherapy. The therapy exposes your entire body to temperatures as low as negative 200 degrees Fahrenheit for anywhere from two to four minutes. This type of Cryotherapy has been used in China since the 1970s to treat such conditions as multiple sclerosis as well as rheumatoid arthritis. Over the past few decades, western societies have been utilizing this modality to minimize muscle soreness in elite athletes. The idea is that by cooling the body down quickly after vigorous activity, there will be less blood flow into the areas of your body that may have suffered micro injuries during the sport. With less blood flow to the injured areas, there will be less inflammation after the event and less swelling which ultimately can lead to faster recovery and less pain and stiffness after the rigorous event

The bottom line is that these theories are still being clarified and the actual results of these treatments need further study. It may make sense to use cold therapies after aggressive work outs or sports events as long as there isn’t tissue damage that can occur if the cold exposure is prolonged. It remains to be clarified as to what actually qualifies as “too long”. Stay tuned as there is a lot of new information coming out all the time about this innovative approach to recovery.

The opinions shared in this article are those of the contributor and not Total Gym Direct.

Tips for Eating Before Working Out in the Morning

How Anxiety Effects Your Body