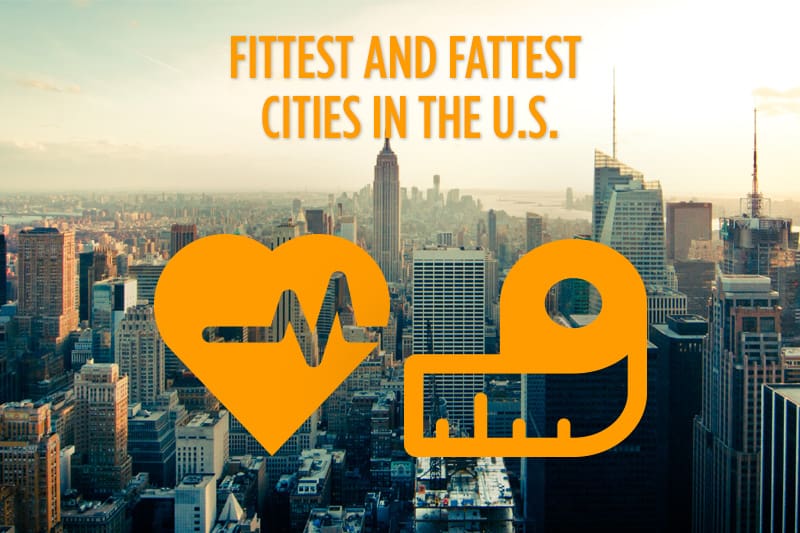 The Fittest and Fattest Cities In America:
The Growth of Obesity, Exergaming & Other Info.

The Huffington Post recently released their list of the top ten , most physically fit cities in the United States in 2015 and ranked them as follows:

While the selection of some of these towns may seem obvious, others could be surprising. For example, recognizing the fact that the Golden State of California had four winners placing in this list, it could be said that for those living in some warmer settings, they may be inclined to go outdoors more often. But that doesn’t explain some of the other contenders found in colder climates, like number two finisher Minneapolis, Minnesota, the showing of Denver, Colorado in the sixth spot or ninth place Boston, Massachusetts.

According to this article, other factors for those who live in healthier environments include how far people live from the nearest park. When it came to the first place finisher, Washington D.C., for example, 95% of those living in this politically populated area have a short, ten-minute walk to a nearby park. For the lower scoring town of Indianapolis, Indiana, who placed in the 50th spot, only 31% of their residents live within a ten-minute stroll to their closest outdoor recreation area.

In order to measure which are the healthiest cities in the US, in this case, information was gleaned from the annual ACSM (American College of Sports Medicine) report from the American Fitness Index (or AFI). This yearly study examined information collected from fifty of the largest metropolitan areas found inside the United States. These reports look at a variety of different factors including obesity rates, debilitating diseases like diabetes and those who smoke or regularly use tobacco products.

Unfortunately, according to AFI results from 2014, there was a 7.8% increase in reported diabetes cases and death rates compared to 2015. There was also an 11.8% decrease in the amount of people who exercised on a daily basis from this same time period.

According to an AFI advisory board member, Walter Thompson, their results answer an interesting question, “I want to be physically active and healthy – does my environment or the community in which I live support my desire to be healthy?” Their results have shown that the top ranking cities have the best access to local parks and recreation areas.

But getting a proper pathway to these green areas, parks and other outdoor environments don’t exactly grow on trees (pardon the pun), they come with a price tag. In the Indianapolis and D.C. comparison, Thompson shares, “Another consideration is how much funding goes to parks. In Washington, D.C., the city spends $287 per person per year on parks. Indianapolis only spends $24 per person per year on parks. All of our top ranked cities all spend more money on parks than our lowest ranked cities.”

As an alternative to walking to a nearby park as mentioned previously, some towns are extremely bike-friendly when it comes to accommodating cyclists in their cities. Take Davis, California for example, renowned for its University, it has also been referred to as “Bike City USA,” since there are more bicycles than automobiles to be found within this small college town. In addition to being the first city in America to institute the use of bike lanes, you can also visit the Bicycling Hall of fame located in the downtown area.

Davis is also home to an elaborate network of paved bike and pedestrian pathways through miles of off-road, park-like settings known as the green belt. This network of non-automobile accessible routes meanders through many parks and recreational areas that helps connect cyclists, runners, joggers and walkers in reaching their destinations found within this outdoor setting. Other notable entries from CNN’s list of the best towns for two-wheeled enthusiasts include:

Conversely, when Fox weighed in on the subject (another pathetic pun) of some of the fattest cities in America, according to their findings which are based on obesity rates, their top ten list includes (followed by the percentage of those found to be obese within their population):

Similar to the findings for those healthy individuals found mostly in California, it makes one wonder if the residents of Louisiana are heftier due to the world renowned cuisine found in their part of the country. For residents of North Carolina who appear in even more of these top ten slots than folks from the Bayou, they’re well known for fried cornbread and other fattening foods in this region.

Some statistics contained inside this article relate to health care expenses associated with the obesity epidemic in America, where it’s estimated that medical costs for these overweight individuals are said to account for around $147 billion in annual spending. According to these types of studies, those who are obese are said to spend 42% more on medical expenses compared to their thinner counterparts.

When CNN reported on this fitness related topic, they cited Brenda Rahe, a certified personal trainer, body builder and wellness coach who offers, “If you live in a city which makes it hard to walk or get to a gym, you can still get active, you just have to look for creative ways. There are tons of exercises, online training programs and coaches that you tap into from home.”

For example, there’s a relatively new trend referred to as “exergaming,” which is a combination of exercising and playing video games that involves more activity than simply sitting in front of a screen. An online informational brochure from the ACSM calls it “the future of exercise” in a world where children are spending an average of 50 hours or more staring at monitors, whether it’s a television screen, computer or video game console.

Before the advent of gaming systems, you could often find this form of exercise available in gyms, health club settings and those specifically geared towards children could be accessible at many local YMCA and community centers. Unfortunately, most of this equipment was impractical or too expensive for people to use in their homes. But luckily, producers of gaming systems like the Nintendo Wii and Microsoft Kinect systems have solved this problem.

Perhaps in response to the growing childhood obesity epidemic in our country, catching the fitness bug is easier than ever thanks to these smaller consoles that are both affordable and more easily accessible. Speaking of accessibility, thanks to the internet, smartphones and the explosion of online apps, many fitness programs are now available for those on the go available on their handheld devices.

Statistics on Youth, Fun, and Fitness

When surveying adolescents, 80% of them believe that having fun is the single, most important element in their life, hence the overwhelming popularity of gaming and other engaging online activities such as social media networks. When it comes to exergaming on the internet, many of these online venues allow participants to interact with multiple players and this gives youngsters the opportunity to compete side-by-side in a virtual world while interacting with their peers.

Since the video gaming industry is worth over $10.5 billion in revenues, playing these types of games makes them one of the most desirable and enjoyable hobbies with young people today. Therefore, engaging in exergaming allows for youngsters to play their favorite games with friends while becoming more active and healthy at the same time.

Also according to the AFI report, many people across the country aren’t eating as healthy as they once were, specifically by consuming fewer fruits and vegetables. As a result, the AFI report indicated that those cities ranking much lower in overall fitness also had the fewest number of farmers per capita.

Statistics from some former skinniest city studies as reported by Live Science, found Boulder, Colorado as being more fit according to obesity rates. Using data from a Gallup-Healthways poll, their survey showed that at least 15% of citizens living in 187 out of 190 metropolitan listed areas were considered obese. This means that only three out of almost two-hundred cities in these densely populated areas failed to meet the US Centers of Disease Control and Prevention’s goal of a 15% national obesity average.

Boulder’s residents came in just barely over 12% of overweight individuals found inside this metropolitan population. Fellow Coloradans found to be breaking the obesity barrier were located in the Fort Collins-Loveland area along with people from Bridgeport-Stamford-Norwalk neighborhoods in Connecticut also falling under the 15% rate. Meanwhile, one of the worst obesity and overweight offenders were found in Texas from the McAllen-Edinburg-Mission region whose hefty townsfolk soared to almost 40% of its total population.

In conclusion, AFI’s spokesperson Thompson reminds us that, “It’s the choices and little changes we can make in our lives each and every day that can have the biggest impact,” especially when it comes to our health and overall well-being.” After all, the subtitle of the AFI report is “Actively Moving America To Better Health,” and adopting some healthier choices and participating in some newer exercise options will help to accomplish this goal.

How to Become a Better Swimmer

Training for Your First 5K – Week 4