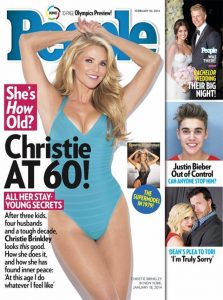 People Magazine celebrates Christie Brinkley turning 60 by featuring her on the cover of their latest issue this week. Brinkley, a highly successful model, actress and long time Total Gym user, turns 60 this upcoming Super Bowl Sunday February 2nd. In the article, Christie reveals all of her stay-young secrets that have helped her get through raising three kids, four marriages and having one of the most successful modeling careers in history. She has appeared on the cover of over 500 magazines, and spent 25 years as a spokesperson for Covergirl.

In addition to People Magazine cover, Christie will also be featured in Sports Illustrated’s “50 Years of Beautiful” TV special set to air on NBC Monday February 3rd. The special will feature the most popular cover girls from the magazine’s yearly swimsuit issue.

People Magazine quoted Christie as saying “I’m actually excited about turning 60, I feel on top of my game.” MJ Day, who is Sports Illustrated’s Senior Editor told People Magazine “She has the legs of a 30 year old and the face of an angel. She’s what you aspire to look like at 60. She’s mind-blowingly beautiful.” 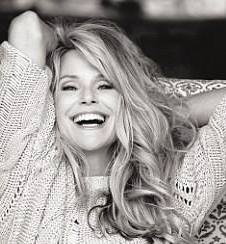 In the interview above, Christie answers the question “What’s the secret to your long career in modeling?” According to Christie it comes down to two things: Eating right and exercising. She says there are no magic potions, although she does credit certain lotions that can be beneficial to one’s youthful look including some from her upcoming skin care line. It comes down to making the time to exercise and staying healthy. Brinkley says she feels better with consistent exercise. She has had a life full of exercise whether it’s been indoors or out. This is why Christie loves the Total Gym – it is always available for her to use at home.

Christie mentions another great benefit of working out on the Total Gym. Before she goes skiing, dancing or even kayaking Brinkley uses her Total Gym because she can strengthen, lengthen and warm up her muscles. Not only does this help Christie perform at her best but it can also help her prevent injuries as well. Christie ends the video by saying one of her beauty secrets is in fact the Total Gym. 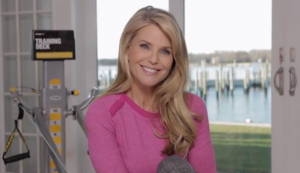 We here at Total Gym would like to wish Christie a Happy Birthday and congratulate her on her People Magazine cover adding another milestone to an already amazing career. Her incredible fitness lifestyle has her looking and feeling younger than ever and we can’t wait to see what Christie has planned for 2014!

What Is Brain Fog and Why Do We Experience It?

Catch Stress Before It Starts