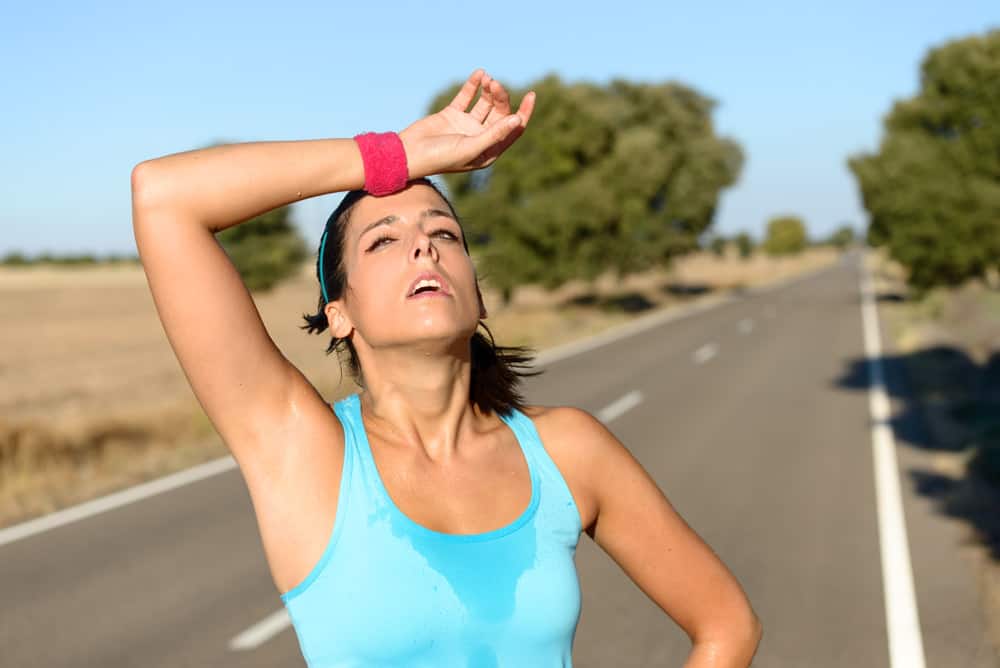 Die-hard runners withstand a lot of obstacles to maintain their daily runs, including traffic, animals, difficult terrain and shin splints to name a few. But one obstacle that die-hards pride themselves on is running in any weather condition – rain, cold, wind and heat. Some runners discuss overcoming these obstacles as a testament to their mental toughness. Running in hot weather is probably one of the biggest obstacles for any runner, because if not done properly, it can lead to health problems and a trip to the hospital, or worse.

Surprisingly, because our bodies generate heat while running, cooler weather allows the heat to dissipate through sweat and is better for distance runs. The ideal temperature range is between 45 and 60 degrees. As the temperature rises, our body’s ability to give off heat is compromised. Dr. Angel Hillman, an exercise physiologist notes that: “The cooler the temperature, within reason, the more heat your body can give off to keep you from overheating. You cannot lose heat to your environment when it’s warm as you would if the temperature were lower. You store it internally and this can cause you to overheat.”

Overcast and 45-degree weather might not be the sort of day most folks dream about, but it doesn’t get much better than that for an outdoor run.

It appears the temperature tipping point for re-thinking a run is when the temperature exceeds 80 degrees. Exercise physiologist, Yannick Molgat-Seon, notes that this is the point when additional sweating doesn’t do you any good. “When you’re dripping sweat, there’s lost water as opposed to lost heat,” Molgat-Seon says. You also begin to run into the limits of not only your body, but of physics. “There are conditions in which no matter how efficiently you sweat, it won’t evaporate fast enough to keep pace with the rate at which you are generating heat. Your only alternative is to slow down.”

According to StrengthRunning.com, some of the physical issues that arise from running in the heat are:

Muscle spasms that are caused by large fluid and electrolyte losses from sweating. They can occur while exercising but also hours after your run. No need to worry, they’re not serious – but make sure you stay hydrated and get enough electrolytes with sports drinks or fruit like bananas.

We’re all familiar with dehydration. Up to a 4% loss in fluid levels from exercise is still safe, but any more than that and you may experience dizziness, fatigue, and even mental disorientation.

If you work out too hard in the heat, you may come down with heat exhaustion – a case of dehydration, headache, nausea, and a core body temperature of up to 104 degrees. It’s much more common in runners who aren’t adapted to the heat.

If you think you have heat exhaustion, stop running, get out of the sun, and cool down with a cold drink and preferably air conditioning. And next time, run earlier in the day!

Danger! Heat stroke is very serious since your core body temperature is probably over 105 degrees. Symptoms include disorientation with clumsiness, confusion, poor balance, and a lack of sweating. Immediate medical attention is required where you’ll be cooled with a cold bath, air conditioning, and cold liquids.

If the above warnings from StrengthRunning.com don’t scare you, then follow the below tips to give yourself a fighting chance to complete the run.

Run in the early morning or late at night, especially in the summer months, to avoid the heat of the day.

Don’t do long or higher intensity workouts during the heat of the day. If you must run at midday, pick routes with shade. As a general rule, start your workout slower than you usually do. If you’re feeling good halfway through, it’s okay to speed up a little bit.

Wear as Little as Possible

Wear apparel that’s light in color, lightweight, and has vents or mesh. Microfiber polyesters and cotton blends are good fabric choices. Also, be sure to wear a hat, shades, and sunscreen with an SPF of 30 or higher.

Watch Your Alcohol and Meds

Alcohol, antihistamines, and antidepressants can all have a dehydrating effect. Using them just before a run can make you have to urinate, compounding your risk of dehydration.

Give yourself 8 to 14 days to acclimate to hot weather, gradually increasing the length and intensity of your training. In that time, your body will learn to decrease your heart rate, decrease your core body temperature, and increase your sweat rate.

It’s always hotter in cities than in surrounding areas because asphalt and concrete retain heat. If you must run in an urban or even a suburban area, look for shade. Any park will do and try to go in the early morning or late evening.

If possible, start your run going with the wind and then run back with a headwind. Running into the wind has a cooling effect, and you’ll need that in the second half of a run.

Have a Pre-Run Slushie

The idea is that ice increases your core temperature capacity, cooling you down so you have more time before you would reach a dangerous internal temperature.

In hot weather consider some safer options, including running on an indoor track, running on a treadmill or pool-running. Or try some other stamina testing activity like rowing on a row machine. Consistency and stamina are admirable runner attributes, but be safe out there.

Benita Perkins – is a widely acclaimed health and wellness branding expert focusing on the fitness needs of women and the special demands they must overcome to step into a lifetime of healthy living through fun, interactive lifestyle events. Her company, Bennie Girl Health & Wellness Branding & Events, works with businesses and organizations to associate their brands and products with a healthy lifestyle, by identifying opportune events to participate in and activities that will best define and communicate the organization’s mission.

Meditation To Calm The Mind

Exercises for Swimming on the Total Gym

Make Yogurt a Part of Your Healthy Eating Plan

Strive for Progress, Not Perfection