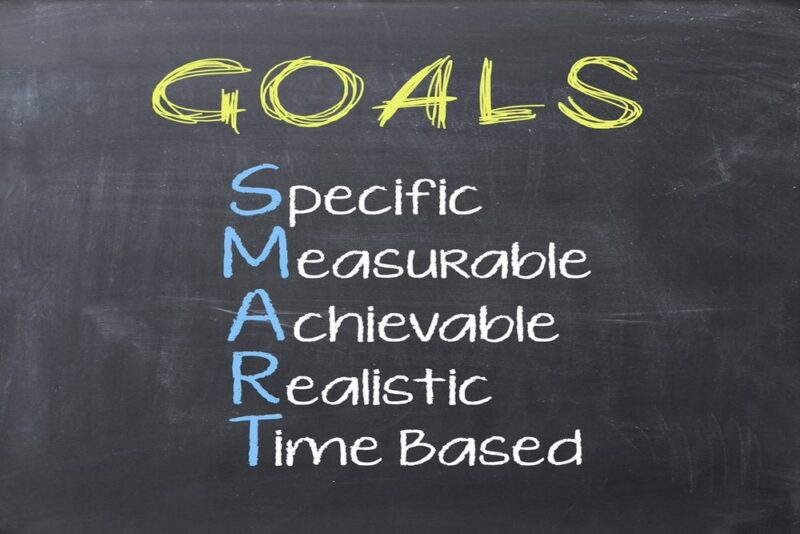 It’s really common for people to set New Years’ Resolutions that they don’t really think will be successful. Sure, they’ll give it a red-hot go, maybe they will even last longer than they initially think, but in time, it peters out, and old habits take the wheel. The resolution gets abandoned. In fact, most people give up less than 2 weeks into the new year .

There are many different reasons that the resolutions get abandoned, but the most common reason is the lack of a well-formed goal, as opposed to just a vague ‘resolution’.

We can fix that.

How to set SMART goals

Let’s imagine two people: Alex and Cameron. They both want to get healthier in the new year, and they decide that January 1st will be the start of their new healthy lifestyle. They both want to improve their fitness and lose a little weight, and they both have an idea of what that success will look like.

Where they’ll find the biggest difference is in the goals they set for themselves. Alex will set a simple new year’s resolution, but Cameron will create a SMART Goal.

The idea is that rather than a vague statement of purpose like a resolution, you create a concrete and actionable goal that allows you to measure your progress against it.

Alex’s new years’ resolution is simply “This year, I will lose weight and get healthy”. It’s a nice ideal, but it lacks detail. How much weight? How will you lose that weight? What do you define as healthy, and how do you know if you hit it? When will you reach that goal?

The problem is that this resolution can be easily achieved or easily dismissed. If Alex gains a single pound, has the resolution failed? Or does it end the second even 10 ounces have been dropped? If Alex gets healthier, but that involves building some muscle which causes weight gain, which part of the resolution takes priority - is it lost because there was weight gain, or won because muscle mass is “healthier”? There are too many variables in such a vague resolution.

Compare that with Cameron’s goal:

“By the end of January, I will lose 3 pounds by going to the gym before work instead of sleeping in.” Already you can see that Cameron’s goal has more to it than the simple ambition; there’s a specific and measurable goal, it’s both achievable and realistic, and there’s a time frame attached to it. Identifying a 3 pound loss goal means that there’s a clear point of achievement. The goal gets assessed at the end of January and can be objectively determined as met or not met. Because of Cameron’s starting point as a beginner, the goal is both achievable and realistic - it’s not “10 pounds” which might be technically achievable in a month, but unlikely to succeed and therefore wouldn’t be realistic.

Furthermore, a SMART Goal is editable. Let’s say Cameron experiences a really busy period at work and doesn’t meet the goal. That doesn’t mean outright failure on the ambition of losing weight and getting healthier; it just means the goal might adapt. Perhaps instead of an outright goal of losing weight, Cameron instead sets the goal as “For the month of January, I’ll go to the gym three times a week and go for a walk on three other days, and give myself a rest day.”

This meets all the same criteria - It’s specific about the days and activity, it’s measurable and achievable simply by going to the gym or going for a walk, it’s realistic as a way of introducing new activity into a lifestyle while also not overdoing it right away, and it’s time-based around the month of January. The best thing about either of Cameron’s SMART Goals is that they have a plan attached to them. SMART Goals let you define your milestones and benchmarks, they let you reconsider what work you’re doing and change things up when necessary, and they provide you with a much clearer framework to work with, rather than simply hoping for the end result.

If your resolutions are feeling a bit vague, turn them into a SMART goal and (if you’re up for it) share it in the comments below!

Coach Josh Wood, BHSc GCSC is a Personal Trainer and Backpacking Coach who lives in Hobart, Tasmania. Josh works to help people find their passion for activity. He spent most of the last decade studying the body through manual therapies, health science, and strength and conditioning. With a background in teaching Massage Therapists and Personal Trainers he also writes for various online publications which keeps his communication skills sharp. His diverse background brings the many facets of health and fitness together. Head over to coachjoshwood.com to learn more!

How to Start a Fitness Journal for the New Year

Office Workout: Improve Your Health Without Leaving Your Chair

Men, beef up those chicken legs on the Total Gym!