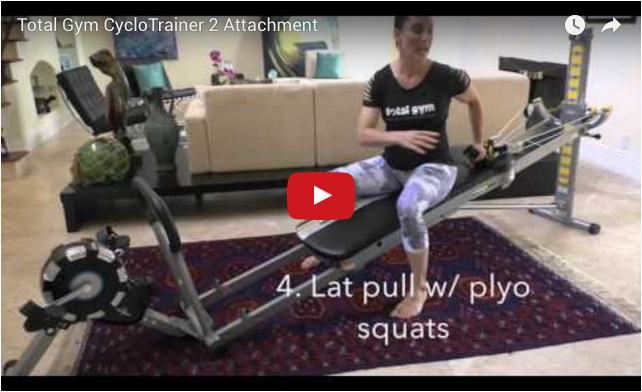 For the days when the weather isn’t cooperating for outdoor exercise, your bike has a flat tire, or you just want to add a cardio challenge to your Total Gym routine, the CycloTrainer 2 (CT 2) is a perfect addition to your workout arsenal.

The more compact size of the CT 2 means it takes up less room; and it’s lighter, making it easier to move or lift. Whether you’re tall or small, using the CT 2 is easy. Adjust the dynamic “seat” for longer legs by moving the glideboard down on the column to open the hip angle—this is especially important if the glideboard is used in the closed position on the rails. People who wish to work at a higher intensity with the glideboard raised on the column, will need to find a comfortable hip angle. Moving the glideboard up the rails into the open position until there is a soft bend of the knee at the bottom of the pedal stroke will allow a more comfortable ride.

Getting Back to the Basics

Note that the CT2 is manually operated—there is no battery-operated LCD screen with a digital readout of distance, time, resistance or speed. There’s only a dial-in knob for setting resistance from level 1 to level 8, with level 1 being the easiest. The low-tech aspect may be attractive to those who don’t want to fiddle with digital settings during a workout. Not to mention the dial-in resistance is familiar to anyone who has spent time on a stationary bike in a gym.

Everything else is similar on both the original CycloTrainer and the CT 2, from the pedal size and shape, to the way the equipment attaches to the Total Gym.

Gearing Up for the Workout

Using the CycloTrainer 2 for a cardio workout is a given; but it’s also perfect for physical therapy in rehabilitating those who’ve lost strength in the muscles of the lower extremity. Because the legs can be loaded individually when the glideboard is in the open position, the CT2 can target the weaker limb to ensure a balanced workout. Muscles targeted include the quadriceps, hamstrings, gastroc-soleus complex, and gluteus maximus. Depending on the level of the workout, the equipment can be used to tone the butt and thighs or build strength therapeutically.

The lack of handlebars and the supine/reclined position of operation also make the CT2 ideal for those with back injuries and shoulder or arm weakness. It’s better than a recumbent bike because the CT2 can be pedaled in a completely supported position.

In addition to providing lower extremity strengthening, the CT2 can incorporate abdominal training when the head and shoulders are lifted off of the glideboard. This can be performed as a crunch or a crossover crunch.

Of course, the CT2 is a great go-to for cycling training when the weather isn’t cooperating outdoors. Just jump on, choose the level of resistance and start pedaling, no extra gear needed.

Circuit training with the Total Gym is a natural progression, with the CycloTrainer 2 functioning as a cardio-intensive part of your workout. Below is a sample circuit for a great workout using the CT2. Areas targeted include the glutes, thighs, shoulders, chest, arms, back and abs.

The squat stand or toe bar and hand cables can all be easily attached to the Total Gym while the CT2 is still in position at the end of the machine. Use a timer for the aerobic conditioning portion of the workout on the CT2. Count reps and sets for the other exercises.

Complete three circuits for a 45-minute workout. You can choose to only do one or two circuits if you are short on time. This is NOT a Tabata workout, so don’t try to do the exercises quickly. Concentrate on good form.

Warm up on the CycloTrainer 2 for three minutes with glideboard in closed position.

Once you’ve completed the ten stations three times (or however many times you want), cool down on the CycloTrainer 2 for three minutes, pedaling at medium or low resistance with glideboard closed. Don’t forget to stretch quads, hamstrings, glutes, shoulders, chest, arms and abs.

Jodai Saremi, DPM, BS , is a freelance writer, AFAA certified trainer, and fitness model. She has written for American Fitness, SPIN fitness, Your Health Connection magazines, and other online publications. Her articles have also been featured in textbooks. She enjoys an active lifestyle and lives in Ventura County, Calif. with her husband and two children.

5 Foods That Keep You Up At Night

Standing Desks, Trend or Must Have?