Is Soy Good For Your Health? 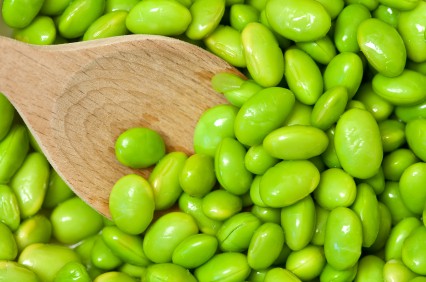 Soy products made from soybeans, an edible legume, can be found in processed foods under many names. Soy protein is commonly found in meal replacement shakes and weight loss shakes used by weightlifters and dieters. Some people use soymilk as a dairy substitute if they have lactose intolerance. You may even see soy lecithin, an emulsifier, in products such as salad dressing or find soy oil in a number of products. Yet, people following a vegetarian or vegan diet typically consume the highest amount of soy in the US, as many vegetarian recipes and vegan recipes use soy as an alternative protein source. But is all that soy really good for you?

Over the years, soy has had both a good and bad reputation. Soy is naturally gluten-free, cholesterol-free, and low in saturated fat. Soy also provides protein, fiber, and heart-healthy fats. Since 1998, products containing at least 6.25 g soy protein per serving are allowed by the FDA to carry the health claim that they “may help to lower the risk of cardiovascular disease” by significantly lowering cholesterol and LDL-cholesterol.

In contrast, according to the Academy of Nutrition and Dietetics, the effect of soy protein and/or isoflavones can vary based on a person’s initial cholesterol levels and whether or not soy is replacing animal protein in the diet. According to some research, adding up to 25 grams of soy protein to your diet can reduce heart disease, which may be due to the vitamins, mineral and a soy compound called isoflavones.

However, not everything about soy is good. It’s naturally high in purines and may not be good for gout sufferers. Research also suggests that soy may not be good for your thyroid when eaten in excessive amounts, an effect that appears to be mitigated with sufficient iodine in the diet. Salt is the main source of iodine in the American diet so consuming a diet high in soy and low in sodium could be a double whammy for your thyroid. It is also recommended to take thyroid medications at a different time than consuming soy, which may interfere with absorption. So it appears soy can be a mixed bag of blessings for some people.

The Hormonal Effects Of Soy

Soy isoflavones are known to have weak estrogenic or hormone-like activity, yet this activity is somewhat dependent on the bacteria present in your colon. The hormonal effects of soy have been researched in regards to menopausal symptoms and breast cancer risk. Breast cancer incidence in Asia, where average isoflavone intakes from soy foods range from 25-50 mg/day, mostly from fermented soy products, is lower than breast cancer rates in the Western countries where average isoflavone intakes in non-Asian women are less than 2 mg/day. However there are many other differences between the American diet and Asian diets, which could be the reason research has been conflicting in this regard. To date, studies on the effect of soy isoflavone consumption on menopausal symptoms have reported mixed results, with modest benefits for some women.

Who Should Eat Soy?

When weighing all the evidence, it appears that soy can be part of a healthy diet for most people, when consumed in moderation. Keep in mind that tofu, tempeh and edamame (immature soybeans) are the least processed soy products, and are part of a traditional Asian diet. If your looking for more protein for muscle building and satiety, try mixing up your protein shakes by alternating between soy and whey protein powder. If you’re lactose intolerant, try using a variety of dairy alternatives such as rice milk, almond milk and even coconut milk. Vegetarians should remember to consume a variety of meat alternatives and remember to use complimentary proteins to balance your amino acid intake, while avoiding excessive soy consumption.

Keep in mind that if you’re allergic to soy, you need to check for hidden ingredients in your favorite products. And as always, remember to eat a variety of nutrient-dense whole foods for good health, muscle building, and weight maintenance.

Eat Healthy on a Budget

How to Eat Healthier by Breaking the Junk Food Habit

The Power of Garlic

Giving Thanks for Healthy Treats